There are many cases of use in which some fields depend on the values of other fields in the form, for example, in e-commerce with different types of products, a lodging project with different rooms typologies, etc.

For DropDown, Radio Buttons and Checkbox fields the behavior is similar. All of them include the choices section: 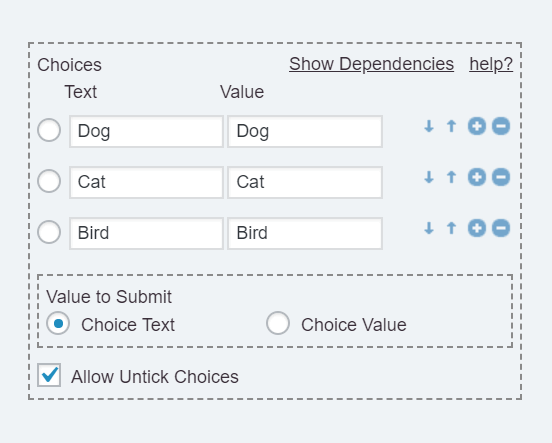 Click on the "Show Dependencies" link in the choices section, to display the dependency controls and dependent fields lists: 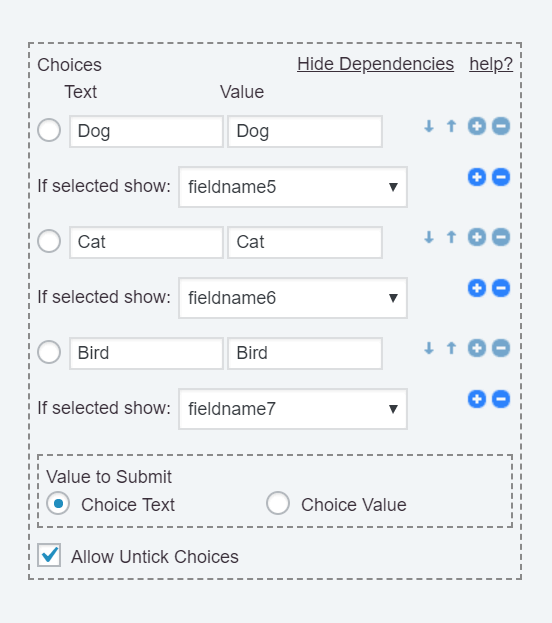 Below every choice would be included a list with the fields in the form. Select the field dependent on the corresponding choice. To define multiple fields dependent on the same choice, click on the plus (+) icon, to display another list of fields, and select the new field from the list, and so on. To remove a dependency, press the minus (-) icon.

The dependent fields would be visible and active, only if it is ticked or selected the choice where they are defined:

Pay attention: The dependent fields would be sent to the server when the form is submitted only if they are active.

The values of dependent fields are zero when they are inactive.

The calculated fields include a specific section where to define the dependencies, but in this case, the other fields depend on the equations' results.

To define dependencies in the calculated fields:

Note: Pressing the "plus" (+) button beside the list of dependent fields it is possible to apply the same dependency rule to multiple fields. 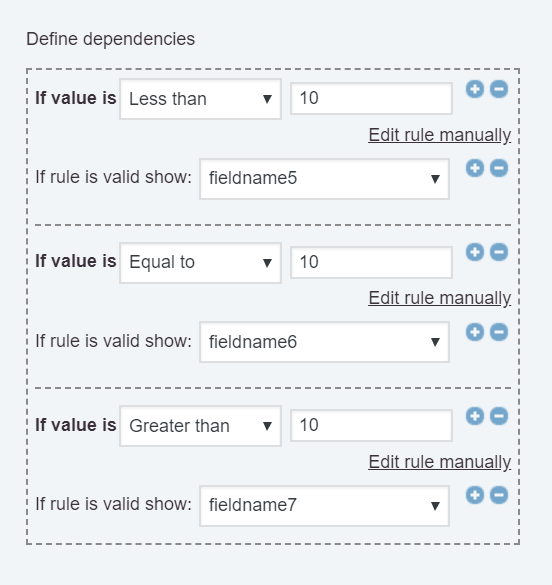 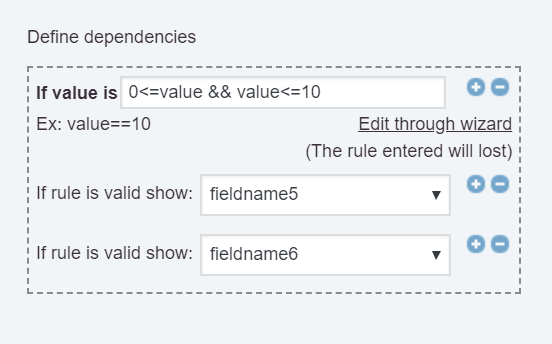 How to define dependencies with other fields?

The plugin does not allow create dependencies in other controls, however, there is possible to use calculated fields as auxiliary to create them. Simply, use the field as part of the equation associated with the calculated field, and define the dependency rules based on the equation's result like in the previous section.

Note: The auxiliary calculated fields are not relevant in the form's interface, to hide them, tick the checkbox: "Hide Field From Public Page" in their settings.

For example: in an e-commerce form, where the fields for financing the purchase should be displayed if the amount entered by the user through the currency field: fieldname1 is greater than $1000.

How to define dependencies depending on the values of multiple fields at once?

Similar to the previous section, it is required to use calculated fields as auxiliary.